Jim Shaughnessy is a self taught potter. He has been making ceramic vessels and sculpture for more then a decade now. Early in his career, Jim studied with local and nationally known clay artists such as Rosemary Aiello. His work can be found in numerous galleries and exhibits in the Rockland/Westchester, NY area.
Jim's work is well regarded and he has been the receipient of many awards. In both 1999 and in 2001 his work was selected to serve as the Rockland County Executive Awards given to artists and supporters of the arts.
In 2002 Jim's pottery was used as the award and presented to nobel laureate author Toni Morrison.
In 2003 Jim's pieces were featured in silent auctions to benefit the American Cancer Society and the Nuyorican Poets Café.
In 2004 the Human Rights Commission selected to use one of Jim’s sculptures in their  annual fundraiser event held at the Waldorf Astoria in NYC.
Jim’s work was selected to serve as awards for then New York State Senator, Hilary Rodham Clinton among others. 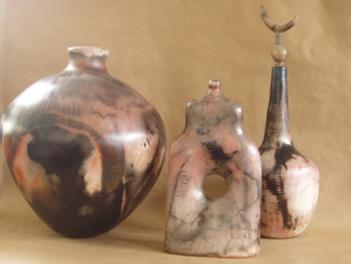